“STAR PUPIL: Ellen Malphrus calls Conroy her “brother in Dickey,” as they were both students of South Carolina’s most beloved poet and the author of Deliverance, James Dickey. Now a professor of literature at USC-Beaufort, Malphrus leans on Conroy as a mentor who gave her some tough love and told her to “sit your ass down and write.” He even threatened to break her banjo, which she was learning to play, if she did not write in earnest. She finally followed his advice and has since turned out a stunning debut novel, Untying the Moon, which follows the emotional and travel adventures of a spirited woman who discovers the meaning of connection through nature, family and her wild heart.” “These weeks since the novel was published at the end of October have been an incredible high,” Malphrus says. “Since then, there have been two dozen events, from signings to readings to keynote addresses to discussion groups — several of them with Pat Conroy — and the response has been tremendously positive.” “Rare are those works that simply are the South; rare are those works that breathe and exhale a Southern air with a naturalness neither contrived nor necessarily even conscious. Lowcountry poet Ellen Malphrus has gifted the reader the latter with her debut novel, “Untying the Moon” and its mesmeric, bafflingly honest and frustratingly contradictory center, Bailey Martin.” 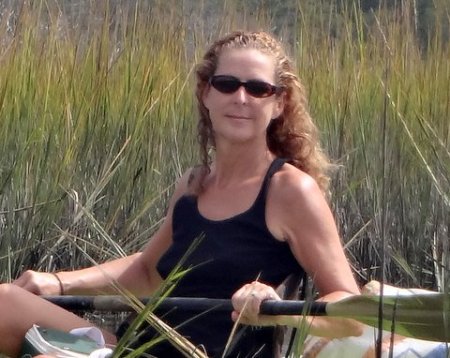 Southern Literary Review
A Magazine for Literature of the American South

“She’s in full control of her craft, offering the reader a sound story, told by a voice poetically clear.”
http://southernlitreview.com/reviews/untying-the-moon-by-ellen-malphrus.htm “Untying the Moon” by Ellen Malphrus…is part mother-daughter story, part road trip novel, and part hymn to nature, among other things…. Malphrus is a published poet, and her prose is lush and worth lingering over. I’m looking forward to plunging deeper into the world she has rendered in this impressive debut.”–Suzanne Kamata, Literary Mama

“Like the novel’s protagonist — Bailey Martin, a free-spirited adventurer — Malphrus has also traveled extensively. And, like Martin, she’s a child of the Lowcountry and has a thing for Buick Skylarks and the natural world.”

“Portrait of the Poet as a Novelist”
Written by Margaret Evans
October 5, 2015

“I didn’t see it as a challenge while I was working on Untying the Moon, but your question makes me realize something important about having written the novel this way – that while there’s pleasure in a ‘quickie,’ of course, my hope is for readers to open themselves instead to a slow seduction.”

“Pulitzer prize-winning novelist, N. Scott Momaday, puts it best in his endorsement of Untying the Moon: “This is a book in which the writing and the writer are one. Ellen Malphrus is in full control of her craft. Her story is sound, her voice clear and melodic, her perceptions keen, and her characters sharply defined and vital. Untying the Moon is a literary experience of considerable merit, one to be savored and remembered.” “Conroy has contributed such depth to the canon of Southern and American literature, the fanfare surrounding his 70th birthday seems more akin to a grand memorial. The praise resonates as eulogy, that is, if you ask his close friends, such as Bernie Schein, Ellen Malphrus and John Warley—all in attendance with several other Southern writers who have found a publishing house with Conroy’s imprint, Story River Books.”

October 28, 2015
By BABBIE GUSCIO
Special to The Bluffton Packet

“Pat Conroy, editor at Story River Books, wrote the foreword to the novel and sat side-by-side with Ellen as they signed more than 250 books. There was a very long line of well-wishers, all thrilled to be there chatting and smiling. It was a smashing success for a first book outing, and rest assured there will be more from our Bluffton ‘scribe.'”

“Malphrus describes herself as someone with an intensely strong sense of home and belongingness to the Lowcountry, combined with a limitless desire for discovery and experience. She has explored these themes of “rootedness and restlessness” in a course (of the same name) she taught at USCB and in her first novel, recently accepted for publication by Story River Books. One of the many doors that opened for Ellen is having bestselling author Pat Conroy as a mentor. He personally prodded her to “get your ass at your desk…live it, work it, 12-14 hours a day.” Pat Conroy is the new editor-at-large for Story River Books, which is a South Carolina based original fiction imprint published by the University of South Carolina Press.”